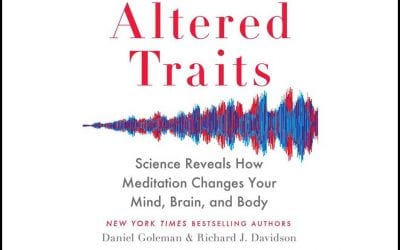 This book is amazing.

For those of us who like a bit of science with our ancient wisdom then look no further than ‘Altered Traits’ by Daniel Goleman and Richard Davidson.

Both these authors are well know and are well established within the mindfulness and neuroscience world. This books starts with describing their journey as young university students at Harvard who ventured to India separately and were amazed about how eastern wisdom was describing the power we can have over our own awareness at a time when western traditions were teaching that awareness was all about stimuli (ie awareness goes towards anything that gets its attention).

They went on to dedicate their lives to the research and education of the science of how meditation and mindfulness can change your mind, body and brain. During the past twenty or so years the number of studies of meditation has skyrocketed from a handful each year to over 1,000 per annum. ThisÂ no nonsense book doesn’t just grab enticing headlines from scientifically dubious studies but instead really thoroughly considers what the most rigorous scientific studies really tell us about these ancient traditions. It considers the different methods of meditation and explains how they can have different effects on the brain and nervous system.

“By zooming in on details of sights, sounds, tastes and sensations that we otherwise would habituate to, our mindfulness transformed the familiar and habitual into the fresh and intriguing”

Dan Goleman (PhD) is renowned for his work and books on Emotional Intelligence and Richard Davidson (PhD) is famous for being asked by The Dalai Lama to research the Buddhist meditation methods using fMri and brain scans and if anything wasn’t true to let him know so he could change the Buddhist teachings – that’s a very open minded Dalai Lama!

If anyone still has any doubt that developing a personal contemplative practice such as meditation or mindfulness can have a totally profound effect on your life then read this book now!